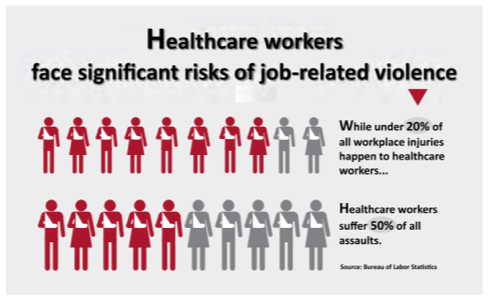 Violence in the healthcare and senior living workplace

Healthcare workers are not punching bags, but you wouldn’t know it from the statistics.

We were asked to present “Best Practices for Violence Prevention and Response” at the recent LeadingAge Maryland conference. We approached it as we approach any hazard: we asses the threats, understand the vulnerabilities, and then employ the five strategies of Prevention, Protection, Mitigation, Response and Recovery to build a balanced portfolio of options.
Our first surprise is that law enforcement does not report crime statistics by workplace. All publicly available information on violence in the workplace is collected by surveys. The most notable is the Bureau of Justice Statistics’ (BJS) National Crime Victimization Study, which is based on surveys sent to 135,000 households annually. The Bureau of Labor Statistics, part of the US Department of Labor, also collects workplace violence statistics, though it does so more sporadically.
While these surveys focus on workplace statistics, very little survey data focuses on prevention and response techniques. So, we conducted our own, and present some of the findings here. Almost 40% of the facilities who responded to our survey indicated they did not have a violent incident in all of 2017. However, 52% reported one or more violent incidents, and of those, more than half reported three or more incidents. Ten percent said they keep no records.
Of the facilities reporting one or more violent events in 2017, 73% reported at least one incident of violence by a patient or resident against a caregiver or other staff person. 25% of facilities reported violence by a resident or patient against another resident or patient; an equal number reported violence or by an outsider against a caregiver or staff. There were fewer instances of violence by visitors or outsiders against staff (15%) or by caregivers against each other (also 15%). The lowest reported incidence was violence by a caregiver against either a patient/resident or outsider.

Weapons of any sort were used in incidents at only 12 percent of facilities who reported any violence in 2017. This figure is not very different than the 18 percent of incidents involving weapons as reported by the BJS survey.

In our research, we asked what prevention and protection tactics were used, and found the following:
The most-reported tactic was locked doors and limited access, and the second most reported was the institution of a weapons policy. Another popular tactic is greeting visitors and requiring them to sign in. It is possible that these tactics are responsible for the relatively low incidence of weapons used in attacks, and in the relatively low percentages of incidents committed by outsiders. However, they will do little to reduce the violence committed between residents/patients and caregivers and staff; nor will they reduce the clear majority of incidents that do not involve a weapon. Clearly, we need different tactics to reduce violence among “insiders” that do not involve weapons. The presence of security personnel, whether armed or unarmed, was widely reported. Some of the “other” answers involved variations on the tactic of using security personnel, so the total number of respondents reporting a use of this tactic is about 50%. We recognize that security personnel represent an important presence during mitigation and response activities as well.
Mitigation and Response tactics are those which are available for use as an incident of violence develops. They help reduce the amount or severity of injuries (mitigation) or help stop the violence (response). Since some tactics can do both, we studied them together.
The most popular tactic is electronic surveillance, reported by 82% of respondents. Experts suggest that the video be monitored and recorded for quick response and use in later investigation and training, but we didn’t ask about those details (and presumably, some respondents would not know exactly whether the video cameras they see in their facilities are being monitored and recorded). “Diffusion and confrontation skills” were reported by 66% of respondents, although in our presentation to LeadingAge Maryland, almost every person in the room asked for more information on such de-escalation techniques. Alarm systems, including “hot buttons” are also popular (58%) and there are a great many options for such systems. Clearly the technology exists for wearable devices that would identify both the wearer and his or her location, but their presence in these communities is minimal.

We asked, “During the past 12 months, how many hours of training specific to workplace violence prevention did EACH employee receive?” As you can see, less than one-quarter of respondents report that their facilities provide two or more hours of training in this area annually. Two hours is enough time, perhaps to teach de-escalation techniques once, without a refresher, or to acquaint staff with self-defense skills, but without the ability to gain any proficiency. If some of those two hours are spent reviewing policies and procedures, then the impact of such training is less practical.
Finally, we asked, “When is the last time you had a drill on workplace violence?” We are encouraged that 21% reported a drill in the last three months. Perhaps this indicates a recent emphasis on such training. One-third of respondents remember a drill in the past year or two, but 46% report no drills in the past two years, if ever.
Our goal is to expand our research, with annual updates. If you work or volunteer in the healthcare field, you can participate in our research.
Please see our accompanying article on Resources for Violence Prevention.
Categories:
Topics: Preparedness, Workplace Violence